Around 4 years ago I came up with a programming joke.

It was the spring of 2013 and I was at the University, listening to a lecture on Object Oriented Programming in Python when an idea sprung to my mind.
I presented it in the form of a comic strip that was very popular at the time. 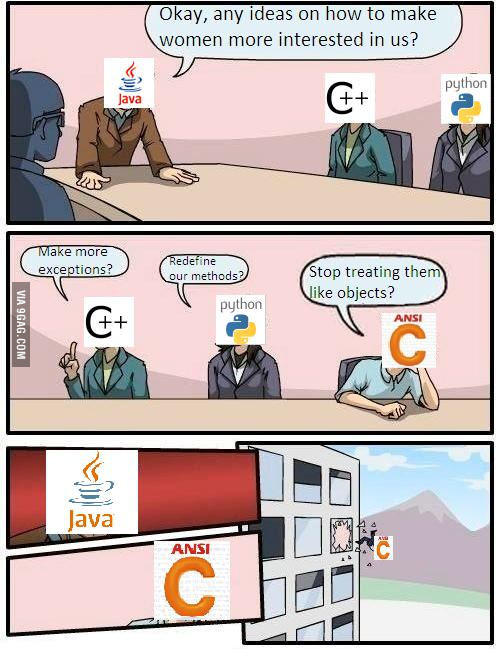 It was a quick, spur-of-the-moment Paint job, but I got my message across. Satisfied with the result, I showed it to a friend sitting next to me. He laughed and said it was quite funny.

Encouraged by his approval I decided to share my cartoon with the world by posting it on the only big worldwide image-sharing site I knew at the time - 9GAG.

Within a day or two the joke got over 90 upvotes. I thought “Okay, there are some nerds on 9GAG”. After all the cartoon was extremely narrowly targeted.
I was quite happy about the upvotes and a bit dissapointed that there were no comments, but hey, it’s the XXI century and it’s really hard to break into the entertainment business! After that brief adventure I forgot about it completely.

About a month ago I started using Reddit which quickly became one of my most visited websites. Imagine the surprise when one morning I’m browsing my favourite subreddit, /r/ProgrammerHumor/, and I see this post.

Whoa! My joke is still alive and kickin’! But what surprised me most were some of the comments:

This meant that my joke must have gained some popularity after I originally posted it on 9GAG. A quick Google search later I found at least 3 posts on Reddit with my joke which had hundreds, over 1k and even almost 3k upvotes!

Okay, I was shocked… This is the first time that I had posted anything on the Internet that became so popular. And without me knowing about it for 4 years!

And look at this: somebody even printed the cartoon out and put it on their magnetic board! 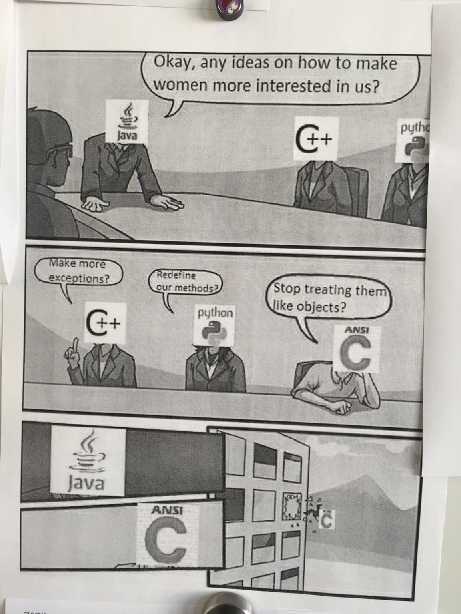 But wait, there’s more. I also found a reference to the joke on a blog, with the description:

I’m usually posting these on Twitter, but this one is too good :)

and it got number 9 in an article titled Best Java Jokes on the Internet!

Okay, enough basking in the glory of a small success of my younger self’s sense of humour crossed with some programming knowledge.

The point is: if you have something to say, share it with the world.
You never know who might dig it out and start upvoting.